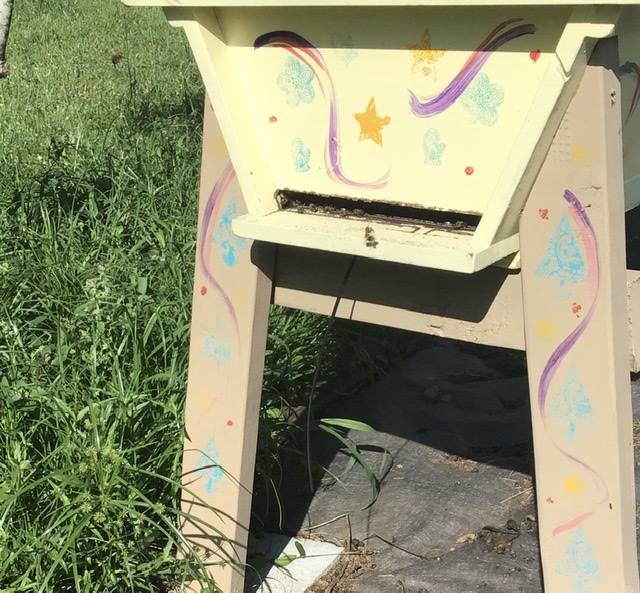 I observed unusual behavior in one of our hives yesterday afternoon. Lots of activity at the entrance, too late in the day to be food-related, in my opinion, but clearly demonstrating communication efforts.

I’ve only read studies and opinions from scientists and beekeepers about the bees’ waggle dance as a communication for food sources. Lots and lots of opinions and studies about that! That may be all that trickles down to the layman, however, so I keep searching the books. Here’s a new one, once again, about food.

“Social communication systems are predominantly multimodal and can combine modulatory and information-bearing signals. The honey bee waggle dance, one of the most elaborate forms of social communication in animals, activates nestmates to search for food and communicates symbolic information about the location of the food source. Previous studies on the dance behaviour in diverse honey bee species demonstrated distinct differences in the concurrence of visual, auditory, olfactory and tactile signals produced by the dancer.”
“Similarities in dance follower behaviour across honey bee species suggest a conserved mechanism of dance communication” Elsevier, Science Direct, Animal Behavior, Volume 169 Nov. 2020 https://www.sciencedirect.com/journal/animal-behaviour

But, non-expert that I am, my hunch tells me this bee behavior was not about food at all, but rather about warning the forager bees that a storm is coming and to not go back out. Shortly after this observation, where the weather front moving in from the north is visible in the distance, all bee activity at the entrance stopped.

I believe I lost a hive early last spring due to either a quick-moving storm, or pesticide poisoning. This new observed behavior tilts my pondering toward the latter. In that particular colony, which was quite large, I checked on them because their entrance activity suddenly slowed to almost nothing. When I opened up the hive I found loads of drawn comb, a healthy number of nurse bees and even larvae, no disease or infestation to speak of, but bars of activity as if flash-frozen in time. Loads of nurse bees in the process of working, heads in cells, dead. My assumption is their foragers never made it home. So, when the temperatures dropped that evening, they hive didn’t have enough thermal mass for their survival.

I apologize for my lack of video skills, still, it’s on the to-do list. And, that whimper at the end is because I got stung by a fire ant, not a bee! Then the dogs came over to check out what I was doing in the grass, which to them always means playtime. Impromptu mission aborted due to attack. 🙂