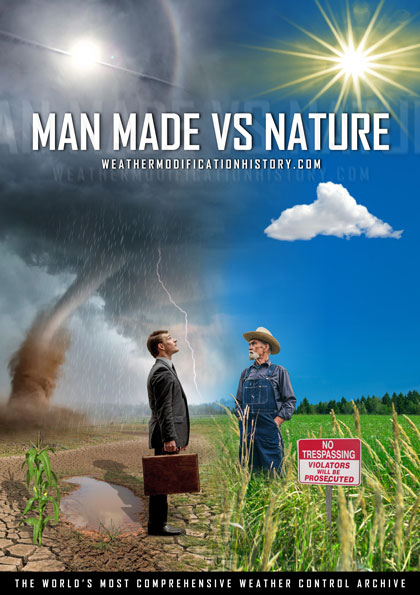 I’m adding a new page to our wee homesteading blog dedicated completely to: Weather modification, climate remediation, climate change, global warming—or whatever the science and corporate spinners are calling it this week.

Here I’ll be posting links, quoting/reviewing books and articles, and including commentary about this crucial and controversial topic, while trying to cut through some of the propaganda of my favorite “conspiracy theory” subject: The Weather.

We start with a couple of primers from the amazing sites and research of Jim Lee.

Disclaimer: I’ve cherry-picked quotes I like from this excellent and well-researched article and recommend a complete reading. However, politically, the final paragraphs I find off-putting, short-sighted and propaganda-driven.  I did not find this to deter from the substance of the main thesis.)

Directly from the Article:

“One purpose of this essay is therefore perhaps unavoidably therapeutic: I wish to help promote an integration of two scientific communities, or more precisely, to persuade the cheery Dr. Jekyll to recognize his alter ego, the dark and mysterious Mr. Hyde, and to do so within plain sight of the entire global climate-change science and activist community. Why? Because until this self-reckoning happens no good will come of Dr. Jekyll’s supposedly benign schemes to deal with Earth’s climate. The clever and above all determined Mr. Hyde, an inveterate national security warrior, will use such schemes for his own anachronistic national security ends. He always has. And history demonstrates these ends do not servethe benefit of all humanity.

The dawn of the Age of Geoengineering: The Sorcerer’s apprentices at play

During WW II “a revolution took place, one that was initiated and sustained not so much by the military as by science,” according to historian Kathleen Williams. Immediately after the war, “Military stimulation of science and technology became institutionalized” and the “Cold War ensured the military funding of science would continue…changing both academic science and the military.”[12]Sixty years ago the writer Robert Jungk noted: “In the universities, once homes of free speech throughout the world, the spirit of secrecy took possession.”[13]The Department of Defense (DoD) alone has accounted for “nearly 70 percent of all government funds directed towards research and development” of basic scientific knowledge.[14]The 350-year tradition of independent, individual investigation of nature and matter gave way to the era of ‘Big Science’, meaning scientific research with big, government-funded budgets. Big Science unequivocally included weather and climate modification, as well as other forms of geoengineering, all of which have been invariably cloaked in secrecy. And “secrecy always lowers the standard of environmental accountability”[15]— not to mention democratic accountability.

Earth’s atmosphere consists of several layers, each significantly related to the other, from the lowest layer, the troposphere, where the air we breathe and the weather we experience occurs, to the stratosphere, which also holds the ozone layer, to the mesosphere, the thermosphere, and finally the exosphere, which shades into outer space. The ionosphere stretches from the mesosphere through the thermosphere and into the lower reaches of the exosphere, from 31 to 621 miles above Earth. It was this region that drew the military’s fiery curiosity: how could it be influenced, what were its secrets, and powers?

After Argus, Starfish, and West Ford, research on the ionosphere proceeded apace with construction of a worldwide network of radio frequency transmitters, and later ionospheric heaters, in the US, Canada, Norway, Greenland, Australia, Puerto Rico, and Peru, in partnership with what the National Academy of Sciences calls the “ionospheric modification (IM) community”[35]of major research universities and institutes working in cooperation with the Pentagon. Research also continued in the Soviet Union. “Atmospheric modification experiments,” Dr. Bertell informs us, “can be categorized as either chemical [aerosols] or wave [electromagnetic] related.”[36]The ionosphere is an “active electrical shield protecting the planet from the constant bombardment of high-energy particles from space” and probing it with radio waves has led to the understanding that a “strong electrical coupling exists between the ionosphere and the lower atmosphere.”[37]IM community research has led to many discoveries useful to the military for global over-the-horizon communications, earth-penetrating tomography (also useful to fossil-fuel and other mining companies), surveillance, and weather or climate modification, among other purposes.[38]

Ever since the early days of Project Cirrus weather modification has been both weaponized and commercialized. Since the early 1970s over sixty countries[43]and most US western states have used weather modification technology to manipulate their weather, programs that almost certainly have had and continue to have an as yet unspecified effect on the planet’s overall climate. One region’s or one country’s drought becomes another’s flood, and one’s rain, a neighbor’s drought. The artificial weather seamlessly becomes the artificial climate. Thousands of regional weather modifications made over the past 65 years, such as the UK’s Project Cumulus (1949–1955)[44]and the US’s Project Skywater (1961–1988),[45]have collectively impacted the world’s meteorological and hydrological cycles in ways that remain largely unclarifiedand ignored by the UN Framework Convention on Climate Change (UNFCCC), the 1997 Kyoto Protocol, and IPCC climate modelers.

In the 1950s and early 1960s climate change geoengineering proposals in both the US and Soviet Union were oriented toward causing global warming for the benefit of human activity, with the melting of the Arctic then the glittering jewel on the geoengineer’s horizon, and a prospect devoutly hoped for by Soviet geoengineers and planners.[60](One fifth of Russia’s territory lies north of the Arctic Circle and includes an Arctic-frontier coastline thousands of miles long.) This original or early orientation of geoscientists has been quietly maintained for decades despite the ever-growing consensus about global warming, and has been funded by the big energy companies who have been wedged inside the great climate change debate since its inception.[61]In a March 25, 2012 letter to The EconomistMatt Andersson, an aerospace executive and intelligence industry consultant, bluntly stated: “The public and press are largely uninformed (and misled) as to the actual Geo-engineering operations being conducted by military and certain cooperating commercial interests to effectively ‘melt’ the arctic for naval navigation and resource extraction.”[62]

The pioneering journalists who covered the early chemtrails story from 1999 to 2005 also reported that individual citizens collected post-spray rainwater samples and had them tested by independent laboratories in several countries throughout the Western world. These tests showed elevated levels of aluminum and barium most frequently, but also many other toxic elements such as strontium, thorium, copper, titanium, arsenic, lithium, boron, iron, sodium, calcium, lead, selenium, magnesium, chromium, and cadmium, among others as well as strange gels, polymers, and a variety of microorganisms. Post-spray rainwater tests have been conducted throughout the world, most commonly in North America, Europe, Australia, and New Zealand.[97]

In the decades since the Vietnam War the state’s and corporate media’s appropriation of the term “conspiracy theorist” has cast a pall over the search for truth about the exercise of power, and especially the state’s covert exercise of its military, intelligence, and technological prowess. This has profoundly colored the search for answers about the military’s ongoing geoengineering activities because secret operations are classified, hence unprovable by standard criteria, and thus remain invisible to the public. Accusations that cannot be verified because of classified information can be safely dismissed withplausibledenial. The doctrine of plausible deniability was specifically adopted by the US government at the outset of the Cold War in 1948: “‘covert operations’ are understood to be all activities…so planned and executed that any US Government responsibility for them is not evident to unauthorized persons and that if uncovered the US Government can plausibly disclaim any responsibility for them.”[112]

The Russian physicist and Nobel laureate Peter Kapitsa wrote of the change that came over science on the eve of WW II: “[T]he happy days of free scientific work…disappeared forever” and science “lost her freedom. She has become a productive force. She has become rich, but she has become enslaved” to governments, war, and commerce, and she is “veiled in secrecy.”[229]After the war diverse writers could claim that science had become, in the words of historian James Fleming, “a prominent and permanent part of all modern militaries,” and that the links between them “in perspectives, personnel, values, budgets, [and] scale…have grown inexorably over the years” with a consequent “militarization of the natural world.”[230]

Science’s “loss” of a “deeply rooted set of ethical beliefs”[231]was compensated by a vast increase in scientists’ social status and political power: “[T]here broods over them a mythological identity” that serves to ensure them a “supremacy within our culture,” and “envisages them as the new Prometheus pitted against the hostile forces of nature,”[232]uniquely serving humanity. Roszak asks if science is “to be pardoned on the grounds it has that it has systematically taught our society to regard knowledge as a thing apart from wisdom.” Such “alienated knowing is, sooner or later, ecologically disastrous knowing.”[233]