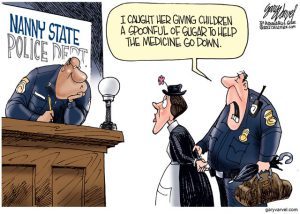 “All of the incremental bricks that have been laid over the years as part of the police state’s prison wall—the invasive surveillance, the extremism reports, the civil unrest, the protests, the shootings, the bombings, the military exercises and active shooter drills, the color-coded alerts and threat assessments, the fusion centers, the transformation of local police into extensions of the military, the distribution of military equipment and weapons to local police forces, the government databases containing the names of dissidents and potential troublemakers—have helped to acclimate us slowly to a life in prison.”

Sin Taxes & Other Orwellian Methods of Compliance That Feed the Government’s Greed | John W. Whitehead | THE RUTHERFORD INSTITUTE | 13 Dec 2019 “Of all tyrannies, a tyranny sincerely exercised for the good of its victim may be the most oppressive. It may be better to live under robber barons than under omnipotent […]

via #NannyState #Kleptocracy: #Sin #Taxes & Other #Orwellian Methods of Compliance That Feed the #Government’s #Greed! — | truthaholics