I lost my last hive just a few weeks ago, mysteriously.  They dutifully pollinated the pears before their departure, sweet little creatures they are.  Unfortunately, they didn’t leave a note, or much clue.  I hope they swarmed and found a suitable new happy home, but I believe from what little evidence remained, that this was not the case.

The drama of the bees has been droning on now for decades.  But of course, have no fear, technology comes to the rescue!  First create the problem, then try to fix it while creating 3 new problems–that’s the modern, strategic, scientifically-advanced model at work.

The next big thing according to TV’s famed Dr. Oz, is the RFID chip.  Keep losing your Alzheimer parent? Get ’em the chip!

Steve Hoffman gushes over the new tech which will allow our minds to merge with one another.  He calls it ‘almost like heaven’—a state of all-inclusiveness with others where our individuality is traded and usurped by the collective, to the extreme degree we can actually feel another’s pain as our own.

But, only if we choose it, of course.  Right.  That’s good, because mark my words, I don’t want to be in his mind, and I certainly don’t want him, or anyone, invading mine at will either.

Will we get to choose?  I’m pretty doubtful on that point.  Right now, do I get to choose whether my region is cloud-seeded, or not?  Nope. https://weathermodificationhistory.com/

Do I get to choose whether Walmart creates robot bees? Nope.

Do I get to choose whether scientists experiment with technology meant to replace nature, meant to manipulate the environment beyond measure, meant to research consciousness with the intention of controlling it, even replacing it? Nope, nope and nope.

Dr. Andreagiovanni Reina, Research Associate in Collective Robotics in the University of Sheffield’s Department of Computer Science, said: “This study is exciting because it suggests that honey bee colonies adhere to the same laws as the brain when making collective decisions.

“The study also supports the view of bee colonies as being similar to complete organisms or better still, superorganisms, composed of a large number of fully developed and autonomous individuals that interact with each other to bring forth a collective response.

“With this view in mind, parallels between bees in a colony and neurons in a brain can be traced, helping us to understand and identify the general mechanisms underlying psychophysics laws, which may ultimately lead to a better understanding of the human brain. Finding similarities between the behavior of honey bee colonies and brain neurons is useful because the behavior of bees selecting a nest is simpler than studying neurons in a brain that makes decisions.”

Do they ever ask themselves if we all have the same vision of a collective utopia?

As they preach for the essential Oneness of humanity, the love and light of unity, the exalted state of community, the Kumbaya collusion of the hive, the higher consciousness of the collective, do they consider as well the famed quote by a character in one of Jean Paul Sartre’s most read plays, “L’enfer, c’est les autres.” (“Hell, it’s other people.”)

As they profess their profound compassion and concern, do they care that some of us don’t care to live with robotized nature?  Have they considered putting their intellectual efforts toward saving nature, co-creating with nature, relating equally to it, rather than commanding it, deconstructing it, subjugating it, destroying and replacing it?

Keep your robots, your synthetics, your hive mind, your Internet of Things, your technological collective Utopia, I don’t want it.

Many of us don’t want it, but we seem to have no choice in the matter.

If I weren’t an optimist, I’d feel we are doomed here on the wee homestead; doomed to watch as we are driven from the heaven of creating our own private Idaho into the hell of another’s version of ‘progress.’

My idea of progress:

Companion planting 3.0 (gardening by aesthetics) — cultivars co-existing with native volunteers (yes, I mean weeds); edibles among poisons; annuals with perennials with crops, seasonal ‘layering’.  More on all that coming soon! 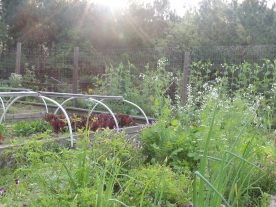 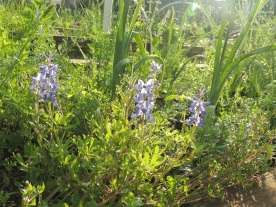