These are the kind of cheeses one has a tough time finding where to legally buy, or sell, not only in America, but in quite a few other Western countries as well.  In most of the countries who consider themselves ‘free’ as far as I’m aware, acquiring licensing for everything dairy under the Federal sun will still not grant you the right to sell such cheeses.  Big Brother is so very worried about our health, after all.
http://theplate.nationalgeographic.com/2015/09/30/some-like-it-raw-the-state-of-unpasteurized-cheese-in-the-u-s/

Some of these are cheeses the way our ancestors made them–even using fig sap as rennet and kefir as starter culture.  Others of them have been made possible only with the help of modern science–freeze-dried cultures in order to create the holes and flavor of Swiss, for example, or the orange-rinded stinky varieties like Munster or Limburger, or the blue veins of the pungent Roquefort, the reliable white mold of a Camembert–which make it possible to imitate, with a reasonable degree of success, the most famous of region-specific cheeses we’ve come to know and love over the generations.

The first time I tasted cheese that did not come wrapped in plastic I was a teenager in France.  It was also the first time I tasted milk straight from the cow.  I was stunned to realize these products, considered the same from my own home to my host family’s home, had almost nothing in common.  To the eye they appeared congruent, but to the other senses they were not even distant cousins.

But it’s one thing to harness an appreciation for the depth and subtitles of a finely- crafted cheese, it’s quite another to think you can make one.  In Texas.  In an ‘aging fridge’ from Wal-mart.  With $7/gallon milk you drive 3 hours to acquire and sometimes using cultures manufactured in a lab.

Is it just for the love of cheese?  It’s true, while doubtless they can’t compete with their cave-aged predecessors, still available in their natural state to only a precious few, I’ve made some of the best cheeses I’ve tasted available in this neck of the Piney Woods.

Handy Hubby appreciates my rather expensive and quite time-consuming hobby, but that’s just a bonus.  I think these old skills and crafts are crucial to maintain and pass along to future generations, that’s for sure.  But none of these good reasons would be enough, even all together, if it weren’t for the pleasure of the process.

The sensuality of cheese-making cannot be over-stated and to describe it would take poetry far superior than is my capacity to create.  This is a hobby that touches, demands, cultivates every one of our senses and a fair amount of intellect as well.  A whole-minded approach is crucial for success, because process alone will only get you so far.

You may scoff and think a cheese is a cheese, it’s a matter of taste alone, and they mostly taste the same.  If so, you poor, poor dear.

“Those . . . from whom nature has withheld the legacy of taste, have long faces, and long eyes and noses, whatever their height there is something elongated in their proportions.  Their hair is dark and unglossy, and they are never plump, it was they who invented trousers.”

You may laugh and say . . . “sound?”  If cheese-making requires a subtle practice of every sense than that includes sound . . . how silly.

Someday I will make the case for sound in good cheese-making, because I think there’s a case to be made.  In addition to my own experimentation, I suspect I need search no further than the many monasteries made famous for their cheeses for more supporting evidence.

Cheese is still more pleasure than exudes the senses in the thrill of retrieving and treasuring a fading art, and in marrying the inevitable couple of progress and tradition.

“We are all served more and more by factory machines, maybe inevitably, and by schedules, even our own, and in time, as has often been pointed out, we come to serve them.  Some of us are becoming chafed by it all.  We seek to reaffirm ourselves, to do and make for ourselves, to find new ways to do so–many of them admittedly old ways, but new and revitalizing ones to us and our friends.  We want to find out how the basic components of our lives are made and come to us to use.  We seek to become part once more of the processes, and possessors once more of the details of our own existence.”

The Cheeses and Wines of England and France, with Notes on Irish Whiskey
by John Ehle 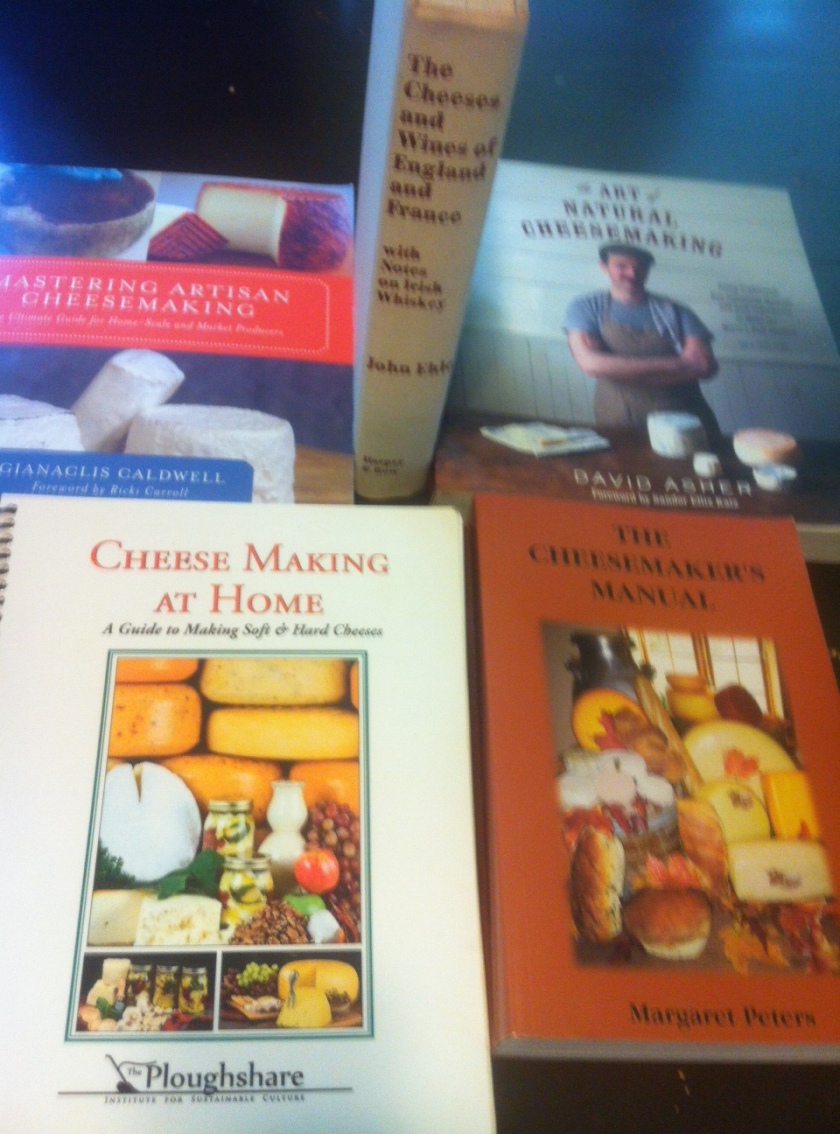 If you want to start somewhere, this is a super easy cheese even a picky American kid would surely like, think Velveeta, only healthy.  http://thepromiselandfarm.com/queso-cheese-spread-dip/