“Fakebook,” Handy Hubby calls it.  Of course he’s right, I’ve long known he’s right.  I left Fakebook years ago, then went back, against my better judgment.  It has become to me one more insufferable Catch-22 of the modern age.

I’ve met a few good folks there and it was the source in finding our new livestock guard dog pups, who are so precious it’s a real challenge not to spoil them!

It is a good tool for keeping in touch, no doubt.  I’ve also appreciated how it’s like the modern equivalent of scrapbooking in some fundamental ways. They keep better track of our photos than I do.  They record it all. And therein lies the Catch 22.

Fakebook has tipped in scales to more negative than positive, not just for me, I see folks leaving it and considering leaving it and I can’t blame them, in fact, I’ve again just rejoined the leavers, and this time, I’m never going back.

I know it’s wrong!  I know they are spying, manipulating, engineering, censoring, and if that weren’t bad enough, the ads are over the top.  I just can’t stand it.  In fact, I find I’m turning to books, real books printed on real paper, just to be able to find a recipe without eight ads and pop-ups attached.

And I know very well it’s not just about the advertising, that’s just the surface level annoyance and distraction.  It is about Big Data, which I’ve written about several times already, but for those still uninformed, some background material.

If I am to align my life with my principles, as I’ve sworn to do, I cannot support this level of technocracy.  Next will be the Smart phones, out of our lives!  We do just fine without satellite TV already.   We will vehemently reject all 5G roll-out “Smart” crap that we possibly can.

We will get better at it, these things take considerable time and effort. We are gradually becoming more refined in making due with the old ways, and isn’t it ironic.  I jumped on-board with educational technology as a grad student, made it my thing, taught online courses since the first years that was possible.

And now I look and shiver as at a golem.  Oh my stars, what have we created?

I must take a deep bow to those who saw it decades before I did, the ones I once considered practically prehistoric.  The ‘old folk’ who were so afraid of technology, so concerned about privacy. The paranoid ones who suspected, no, even had valid proof, that the government could not be trusted with this information power house.

We are in the process collectively of accepting enslavement to the grid. If you still believe the powers-that-be are benevolent, that once was me.  I can’t say all that it was that blinded me then, I was seeing it and reading it, but it wasn’t yet REAL.

I’m reminded of famous words that made a decent impression on me so long ago I can’t recall, by Ralph Waldo Emerson. “Society everywhere is in conspiracy against the manhood of every one of its members. Society is a joint-stock company, in which the members agree, for the better securing of his bread to each shareholder, to surrender the liberty and culture of the eater. The virtue in most request is conformity. Self-reliance is its aversion. It loves not realities and creators, but names and customs.”

We, Kensho, have been learning about self-reliance.  It’s more work and more responsibility than I’d known before, certainly much more physical labor.  Many sacrifices have been made by us both.  We stopped traveling.  Our social and political priorities have shifted.  Our values and worldview and tolerance levels have become much more refined.  Our skill-sets have increased ten-fold.  One of these days I’ll make a list.

But this post is about Fakebook.  What it offers is not worth what it takes away.  In its absence I’ve started reading fiction again.  I’ve also decided to take up sewing, which surprises me about my own self as much as when I took up cheesemaking, my now favorite hobby by far and one I’m getting pretty good at.

“It is easy in the world to live after the world’s opinion; it is easy in solitude to live after our own; but the great man is he who in the midst of the crowd keeps with perfect sweetness the independence of solitude.” Ralph Waldo Emerson 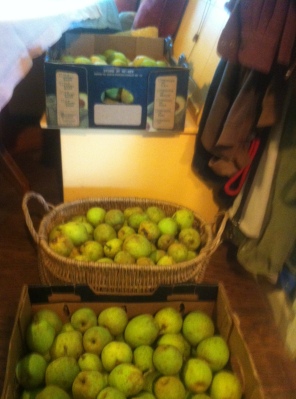 There are so many better things to do!

2 thoughts on “No More Fakebook”